This week features two short two-game series split by two days off in the middle The Tigers are already half done their week, as they visited Yokohama to face the slumping Baystars. Let’s end all suspense and reveal the scores. Yesterday’s game extended the home team’s losing streak to 7, with the Tigers winning 5-3. Tonight’s game evened the series at 1, as the Tigers fell 7-4 after a big 6th inning from the Baystars. 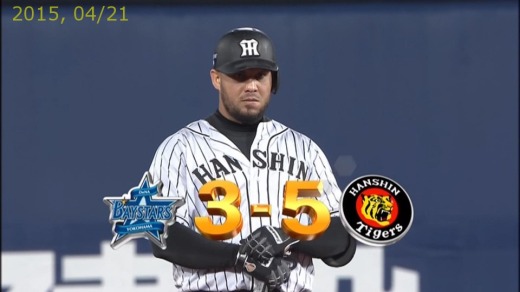 Mauro Gomez has been tearing the cover off the ball lately, with 11 RBIs in his last 6 games.

Game 1: Here is Minoru Iwata‘s progression from the start of the game: out, out, out; out, out, out; out, out, out; out, out, out; out, out, out; out, out, out. Perfect through six. It really looked like he was going to pull off a perfect game. But then the seventh happened. Plunk the leadoff guy. Strike out the next. OK still looking good, still have a no hitte… oh no! HIT! Still have a shutou… wait, that’s gone, too, another hit! And another!?! So after 6 1/3 innings, he leaves the mound ahead 3-2. At least he’s still in line for his first win of the seaso… nope, a home run off reliever Shinobu Fukuhara took care of that, too! Poor Iwata, pitching so well but never notching wins. Fortunately for the Tigers, another clutch hit by revived first baseman Mauro Gomez gave them a two-run lead heading into the home side of the ninth. Seung-hwan Oh, who recently went public about his relationship with Girls’ Generation hottie Yuri, followed a leadoff hit with three straight strikeouts. Game over. Final Score: Tigers 5, Baystars 3.

Slump buster? Matt Murton finally gets a hit after 20 straight ABs without one. Hopefully this one wakes his bat up!

Game 2: For the second straight outing, starter Randy Messenger gave up a crooked number in the first inning. And for the second straight outing, I missed it. Fortunately this time, the number was smaller (2 vs. the 3 he gave up against the Giants on Friday night) and the Tigers were able to give him a lead, as well, scoring 3 in the third. As the game went on, Randy got stronger and stronger, at one point striking out six straight. The game’s outcome was decided in the sixth, though, as with two outs, the Baystars rallied for four hits (including a 3-run home run) and a walk, scoring five and taking a 7-3 lead. The inning ended well for Messenger, as he recorded his 10th strikeout of the game before leaving the mound. Unfortunately the damage was done and the Tigers could only put one more run on the board. Final Score: Baystars 7, Tigers 4.

Series Notes: In Tuesday’s game, Tsuyoshi Nishioka picked up his second straight modasho (3 hits in a game), and then got two more hits tonight. He is back in the top-5 CL hitters on the year… speaking of CL batting champs, Matt Murton finally broke out of his career-worst slump by driving in a run in the 8th inning of tonight’s game. He batted sixth tonight for the first time ever with the Tigers, and still struck out twice (adding to the three from the night before) and desperately needs to turn his season around… Gomez now has RBIs in a career-best six consecutive games and is second in the league with 17. This puts him on pace for 111, which would eclipse last year’s mark by 2… Hiroki Uemoto has drastically improved at the plate since moving back into the leadoff spot. He was batting well under .200 when hitting second or seventh, but is around .320 since the change was made 6 games ago… Messenger set an NPB record for career games by a foreigner with double-digits in strikeouts, with twelve. Next record up for the big hurler: career strikeouts by a foreign pitcher with the Tigers. He trails legend Gene Bacque by 28.