If you decided to attend one of the first games at Koshien but were worried about showing up late, you needn’t have worried. The Tigers also failed to show up early. Often they failed to show up late, too. In all three games of their opening series on their home turf, the Tigers produced zero runs through the first four innings. In fact, they only scored in three innings all series and nearly half of their runs scored came on one error. Obviously it was not a good series for the Tigers, as they dropped three straight against the up-and-coming DeNA Baystars. Since winning their first three of the season, the Tigers have gone 2-7 and no aspect of their game has looked promising during this slide. 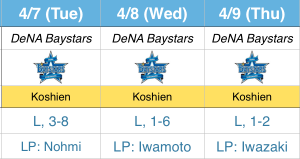 Game 1: Although starter Atsushi Nohmi was only on the hook for 1 of the 5 runs scored against him, he was tagged for six hits and walked one through two innings, which put the Tigers in an early hole. On the whole, the Tigers pitchers combined to give up 17 hits and 8 runs, with only Fukuhara pitching a clean inning. Relievers Kaneda, Shimamoto and Takamiya allowed the ‘Stars to extend their lead back to 5 runs. The Tigers scored their runs on a Kosuke Fukudome solo home run in the sixth, which was followed later by a mishandled Hiroki Uemoto grounder to shortstop. On the whole, the Tigers scattered 9 hits and walked six times, but could not bring enough runners home to make this one close. Final Score: Baystars 8, Tigers 3.

Game 2: After a hot spring and a great first start, young Akira Iwamoto‘s magic ended here, as he allowed consecutive runs in the third, fourth, fifth and sixth innings before leaving with the team deep in a hole. It was one they would never come close to digging themselves out of, as their lone run came in the bottom of the fifth. Mauro Gomez broke out of his long slump with an RBI double, and even added another double later in the game, but the rest of the team was silent around him. They all combined for two hits – a Takashi Toritani leadoff double in the first and a Matt Murton single in the third. They drew seven walks in this one, so it was not a lack of baserunners, but again a lack of clutch hitting. Once again, rookie reliever Tsuyoshi Ishizaki looked shaky, allowing 2 runs in 1 1/3 innings. Final Score: Baystars 6, Tigers 1.

Game 3: Second-year pitcher Suguru Iwazaki hoped to bounce back after a shaky outing in Tokyo against the Swallows, especially with his parents in attendance. And he did a great job, holding the ‘Stars scoreless through seven, and left in the eighth with one out and runners on first and third. Fukuhara gave up back-to-back hits and the Baystars took a 2-0 lead heading into the bottom of the inning. A Shunsuke walk and Tsuyoshi Nishioka double gave the Tigers a golden opportunity to come back, but a Gomez grounder gave the Tigers their lone run of the inning. Final Score: Baystars 2, Tigers 1.

Even the last-place Hiroshima Carp are looking scary as they come to Koshien for the next series. They took two of three from the Giants and sit a game behind the Tigers (and Giants) in the standings. Amazingly, the three playoff teams from last season sit in the last three spots so far this year.

Other Notes: Murton broke the club record for most games played by a foreigner on Thursday, playing in his 704th game. The record was previously held by Willie Kirkland (1968-1973). This marks the second straight year Murton has taken a key team record. Last year he surpassed Randy Bass on the career hits list with 744… The Tigers’ team ERA is currently worst in the Central League (4.25), as is their batting average (.221). Many other Tigers analysts place some of the blame for the former on catcher Ryutaro Umeno, as he tends to call a rather simple and predictable game for the pitchers to throw. Umeno has played in all but one inning so far this season… Through 12 games, the Tigers have scored just 4 runs in the first three innings (36 total) of their matches. This means opposing starting pitchers have a 1.00 ERA against them in the early innings.