(My dreams have been squashed, my future is squashed. Your big dreams and mine, always losers, always Hanshin… HANSHIN!)

Coming into this series, the boys were rocking a 3-6 record since June 30 and were riding a 4-game losing streak at Tokyo Dome. Let’s look quickly at how this series against the hated Giants went down. 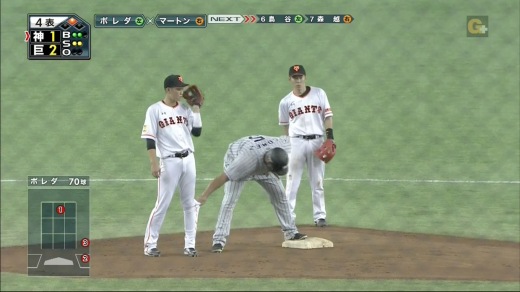 “We might actually come back and win this one!”
“Nah, you’re just pulling my leg aren’t you?”

Game 1: The game started off well enough, with Kosuke Fukudome brought Shunsuke home on a sacrifice fly in the first, giving starter Randy Messenger a one-run lead before he threw a single pitch. Unfortunately that lead disappeared in the second with the Giants putting up a two-spot, and the lead further increased with two more runs in the sixth. Messenger ended the night giving up six hits, six walks and striking out five in six innings of work. The Tigers scored one more in the seventh on a Kentaro Sekimoto grounder. No RBI hits in this game for the Tigers. Final Score: Giants 4, Tigers 2.

Fujinami couldn’t get his leg up on the competition in this one. A rare bad outing from the team’s “future ace.”

Game 2: This team just has a knack for losing by huge margins. Starter Shintaro Fujinami followed yesterday’s 8-walk game with 7 (if you count hit batsmen) of his own in 5 2/3 innings, as he gave up a season-worst 7 runs and struck out five. He allowed 14 guys to reach base, and Ryoma Matsuda got tagged badly as well, resulting in a brutal loss yet again. The lone bright spot was Fukudome’s solo blast to deep right in the 4th inning when the game was still close. Matt Murton‘s sacrifice fly RBI in the sixth gave the team a little hope, but that was dashed in the bottom of the inning. Final Damage: Giants 11, Tigers 2. 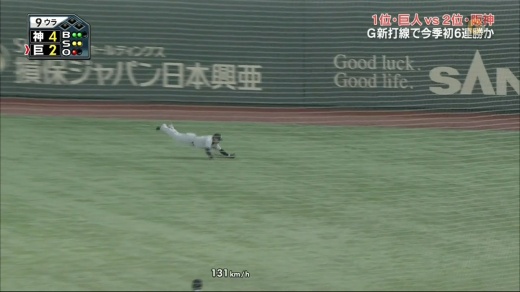 How this guy’s got that much spring in his legs, I have no idea. Fukudome lays out to make a key out in the ninth inning.

Game 3: To avoid the sweep, Minoru Iwata would have to be at his best, as the Giants brought their ace (Tomoyuki Sugano) to the mound. Our lefty was going on 4 days’ rest for the first time all year, and while he pitched well against the Dragons on Tuesday, he was pretty awful in his three starts before that. But he held in strong against the surging Evil Empire, allowing just 1 run in five innings. For their part, the Tigers got on the scoreboard first in this one, with Fukudome recording an RBI in his third straight. The game remained tied until the eighth, when the visitors got the better of Canadian reliever Scott Mathieson. A Murton double was followed by four straight hits/walks, then a sacrifice fly. Another 9th inning home run allowed by closer Seung-hwan Oh put everyone on the edge of their seats to end this one, but the Tigers held on. Final Score: Tigers 4, Giants 2.

Here are the standings after all the action on Sunday.

The Tigers have just two more games before the All-Star Game: a two-game home stand against the Carp. I’ll be at one of them and look forward to the team being over .500 heading into the break. GO TIGERS!