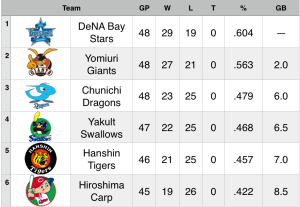 The Hanshin Tigers were seven games out of first place on May 24. Their record was a dismal 21-25, and they were heading into the interleague mini-season, one which has never been kind to them. With the first-place Yomiuri Giants as defending interleague champs, their lead over the Tigers could have easily reached double digits in three weeks (18 games). Instead, the unthinkable happened.

The Tigers went 10-8, which was the best record by a CL team, as the rest of the league got humiliated by the PL to the tune of a 34-53-3 record. The Giants won only 7, and the second place Baystars managed just 3 wins and a tie. Just one game after league play resumed, no CL team had a record above .500, and the Tigers were tied for first. They are still undefeated (5-0-1) since the break, and hold a 2-game lead atop the standings. 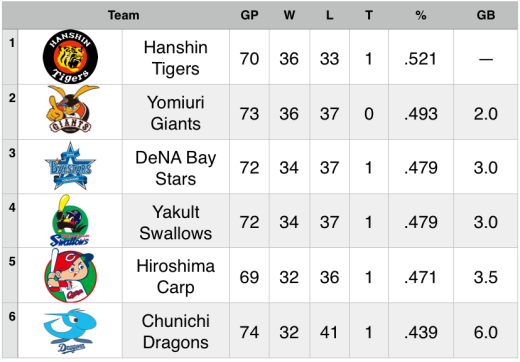 The greatest factor in the team’s turnaround has been its bats. While still in the cellar for team BA (.236) they are closer to the pack than they were a few weeks ago (.225). They are also finally not the weakest team in the CL, as their 39 team HRs are two ahead of Chunichi and just two fewer than the Giants. We already paid tribute to Kosuke Fukudome a few days ago, and he proceeded to hit his 12th jack the next day. Mauro Gomez followed that up with his 9th, making the pair the first in 28 years of Tigers ball to hit back-to-back bombs in back-to-back games. (Mayumi and Bass did it in 1987.) 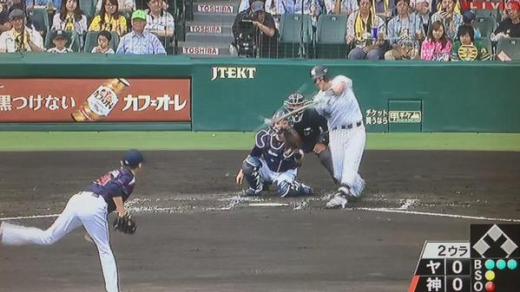 Murton’s first HR of the year came on Saturday, June 20 in the bottom of the 2nd inning.

Today we want to focus on the turnaround of another key player: Matt Murton. We have followed his story closely here as well (see here and here). He got benched at the end of interleague play and received plenty of bad press as he was batting .243 with no home runs through 55 games. Since league play resumed on June 20, he has gone 11-for-23 (.478) with two home runs in six games. His average now (.264) is still well below his career average in Japan (.317 heading into this season) but is steadily climbing up, thanks to 3 straight multi-hit games. This six-game stretch is the best we have seen out of Murton all year and shows promise of the return of the redheaded hitting machine we all know and love. 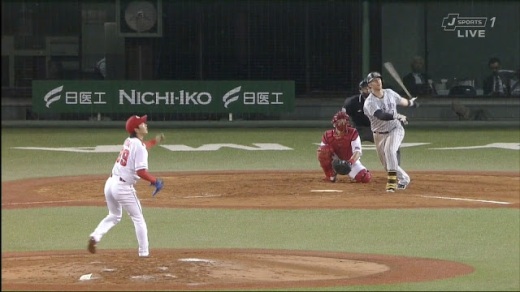 Just a few days later, on Wednesday, June 24, he hit his second bomb. The man is on a roll!

What has helped him turn his season around? Here are some of the possible explanations:

1) His benching and the team’s acquisition of Nelson Perez. It may or may not be coincidence that Murton’s turn around started right around when the team finally found another foreign left fielder. Incidentally, Perez made an error in his first game, going hitless in four at bats. Since then he has settled in a little better, going 8-for-20 in five games. (No home runs yet, but 3 doubles despite a boatload of strikeouts.) Could Matt have felt some pressure that his job was at stake? Did that light a fire under him? Doubtful. He is a professional, and has always been known as one who strives for excellence at all times. It seems unlikely that a guy from independent ball would scare a seasoned veteran into hitting the ball more.

2) His 100-minute talk with Wada and the coaches on a rainy day before league play resumed. It sounds like he was really passionate while talking to them, reminding the staff that he just loves baseball so much. He did most of the talking while the coaches mostly listened, reports say. The rest of the team had long since left the facilities but he kept on going, perhaps releasing some much built up steam. This is definitely a factor worth considering. Coaches and management agreed that he was overthinking things. This could be true, as analysts compiled data showing that he was swinging at just 60% of the strikes he was seeing, as compared with a 69% mark last season. Maybe now he’s getting a better look at the ball and swinging more aggressively at the right pitches.

4) He met an English Tigers blogger in the days leading up to his hitting streak. Yes, that must be it. Couldn’t be coincidence, could it. By the way, the team is 6-0-1 since that day.

Here’s a GIF of Matt making an excellent play in left. Move over, Yamato!

The Tigers go on the road to face the Swallows for three, then head to Yokohama for three more before playing a “home” game (in Okayama) next Tuesday and finally return to Koshien on July 8th to finish that series against the Dragons. It will be interesting to see what the standings look like at that point, as the next series on their plates after that is a road set against their eternal rivals, the Giants. Let’s keep things going, Tigers! We always believed in you, Matt! See you at the ‘Bucks again sometime!

By the way, I don’t want to jinx anyone but so far Murton is 13-for-19 (.684) against tonight’s Swallows starter in his career! Hope to see more fireworks!

One thought on “Season Turned Around?”