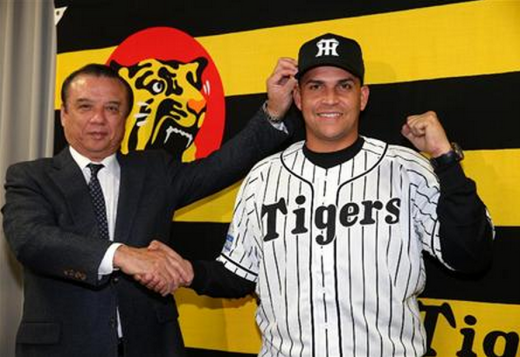 Sanspo and other sources are reporting that the Tigers have officially signed a fifth foreigner to a contract. Mario Santiago of Puerto Rico has agreed to a one-year, 15-million yen contract with the team. Those who watched the 2013 World Baseball Classic closely remember that Santiago was the starting pitcher on the team that defeated Japan in the semifinals. Here are some highlights:

Santiago is 188cm (6’2″) tall, weighs 95 kg (209 lb) and is 30 years old. He throws and bats right. He says he signed with the intention of playing out his baseball career in Japan. Tigers GM Nakamura says he has a variety of pitches and pretty good control.

As many of you know, NPB teams are allowed a maximum of just 4 foreigners on their active rosters, with no more than 3 pitchers or 3 hitters at any time. The Tigers already have 4 excellent foreigners, all title holders last season. Randy Messenger recorded more wins (13) and strikeouts (226) than any other Central League pitcher, Seung-hwan Oh led the league in saves (39), Matt Murton had the highest batting average (.338) and Mauro Gomez batted in more runs (109) than anyone else. So for Santiago to be called up, either one of these men would have to slump badly or get injured. Obviously no one wants that to happen.

So what are the Tigers thinking? Clearly this signing was done with 2016 and beyond in mind. Messenger is signed through the 2016 season, but none of the others are. Oh is rumored to be interested in trying out the major leagues, but I have heard nothing about the two hitters. In any case, I hope Mr. Santiago can adjust well to Japan and stay injury-free. He actually left the WBC semi-final game in the fifth inning with a sore arm and then sat out the entire season recovering. He played Korean ball in 2012 with the SK Wyverns.

Welcome to Japan and the best baseball club in the land, Mr. Santiago!

4 thoughts on “A Fifth Foreigner?”