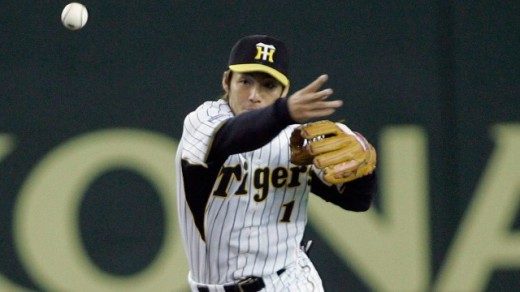 The original article can be seen here 元の記事はこちら

Hanshin Tigers international free agent Takashi Toritani (33) has received an official offer from the Toronto Blue Jays to be their second baseman on the 23rd. Sources revealed that Toritani’s agent, Scott Boras (62) has met and negotiated with the team several days in a row. It also appears the Padres are making attempts to acquire Toritani as well.

At last, an official offer has been presented to the man who has dreamed of playing on the big stage for years. Blue Jays’ GM Alex Anthopoulos made public the Jays’ high estimation of Toritani as a potential second baseman in a local radio talk show interview on the 17th. Major league sources have said that “the Blue Jays have put an official contract offer on the table and negotiated with his agent several days in a row.”

However, the Jays’ top priority is said to be strengthening their mid-relievers, and that Toritani is the final piece of the puzzle, and that the budget is limited. Other sources have said that Toritani is looking at this contract offer and noticing it is not as favorable as the ¥300 million yen that the Hanshin Tigers have offered him.

On the other hand, the Padres are seeking to make Toritani their shortstop. They’ve got Amarista and Barmes as candidates to be starting shortstops but would like to strengthen their depth at the position by adding Toritani. The Jays see him as a starting second baseman. The Padres are thinking of using him at his original position, shortstop. And then there are the Hanshin Tigers, who are set to offer him a much more favorable contract than the two major league teams. The time for Toritani to make his decision is drawing nearer.

Presently, the Hanshin Tigers are waiting to hear back from Toritani. Since declaring his intent to test the waters overseas, he has met with the club once in November and twice in December. The Tigers have indicated they want to sign him to a huge contract. They are hoping against hope that he will bring good news to them in the new year, as they see him as an instrumental part of their title run.