Graphic created by http://cargocollective.com/fzornoff Used with permission. Thank you!

History was made at Koshien Stadium tonight. For the first time ever, two foreigners were named starting pitchers of Game 1 of the Nippon Series. This one was supposed to be a low-scoring battle between Randy Messenger and Jason Standridge. Both had great seasons, and Standridge even shut out the Tigers at Koshien earlier this year. It turns out, another foreigner stole the show as this one had more offence than many expected.

Both pitchers looked dominant early, and this one looked like it could be a repeat of the Tigers-Carp series. Through three innings plus the top of the fourth, there were only two hits recorded. Standridge got beaten by his buddy Matt Murton, and Messenger allowed a bloop single to Imamiya.

Then things opened up in the 4th. Hiroki Uemoto opened the inning with a single, making up for his error in the bottom of the previous frame. Two batters later, Central League RBI champ Mauro Gomez came up and smoked the first pitch he saw to deep left, bringing Uemoto home easily. That first run had the crowd ecstatic, but that was merely the run that broke open the floodgates.

Murton got the best of his buddy Standridge, driving in 2 in the fifth. Photo taken from Sanspo.com

In the next inning, with two runners on, Standridge was starting to lose his control. He walked Toritani, loading the bases for the most dangerous hitter in Japan. Gomez struck again, this time sending a ball back between short and third, scoring two. Murton avenged his fourth-inning strikeout, sending a ball to the deepest part of center field, bringing Toritani and Gomez home. Standridge left, but that was not the end of it. Kosuke Fukudome singled, and the Tigers built up a 6-0 lead.

With just twelve outs left in them, the Hawks started to mount a little comeback. Messenger got in a little trouble as he allowed three singles in the top of the sixth. A sacrifice fly brought in SoftBank’s first run, and the first walk for the visitors loaded the bases back up again. Fortunately the damage was limited to that. Then in the seventh, a leadoff double (which looked foul but went off Nishioka‘s glove) was followed by a sacrifice and a single, but Messenger settled down to get the next two runners and the score was 6-2 after 7. 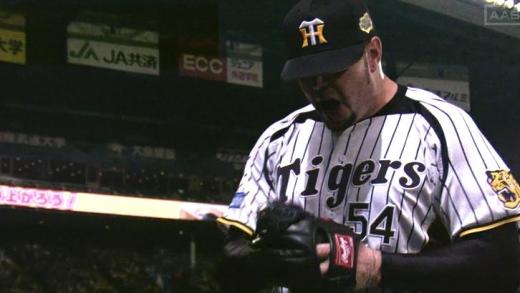 Messenger lets out a shout as he escapes a jam in the 7th.

That was all for either side, as no one put a man on base in the last two frames. Shinobu Fukuhara pitched a clean eighth, and Seung-hwan Oh closed things off in the ninth, ending it with a strikeout. Great game all-around.

Word has it that tomorrow’s starters will be Atsushi Nohmi for the Tigers and Shota Takeda for the Hawks. This is still unconfirmed so we’ll have to wait until game day to find out for sure. Let’s see what happens in Game 2… same time, same place! GO TIGERS!